This debate has been flying around for years - especially due to various articles written by misguided bloggers and so called "journalists" whom, after talking to a couple of local pastry chefs who know next to nothing about chocolate write a long rant on how white chocolate is not really chocolate.

The only truth of the matter is that they would write about the existence of Santa, the Easter Bunny, and the Tooth Fairy if they knew it would sell issues of their publication. 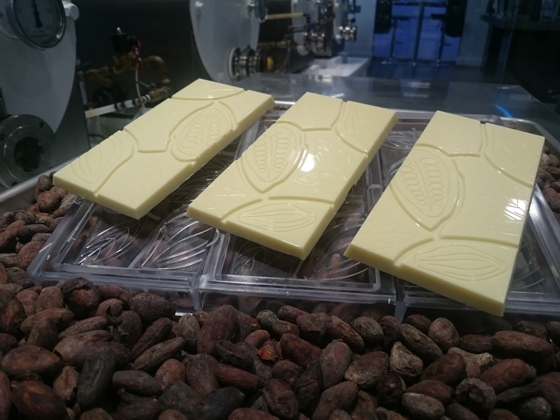 That being said, I'll tell you the truth and do so in a way that will not only make sense, but also surprise you as to what ALL "chocolate" really is. Let's start at the beginning, shall we?

First of all, just like any seed such as an almond, or pecan, or cashew, or peanut, a cocoa bean is made up of fibre (brown stuff), and fat. When the fat from other seeds is extracted, it's called oil (peanut oil, almond oil, etc) and never really goes solid. When the fat from a cocoa bean is extracted it has a unique property that allows it to solidify at room temperature and as a result is called cocoa butter instead of cocoa oil. A roasted cocoa bean is approximately 50% fibre (brown stuff) and 50% fat (cocoa butter).

So you seen, technically chocolate isn't the brown stuff (fibre) at all, but rather the fat from the cocoa bean. Further to that, let's think about cocoa powder for a minute. It is essentially cocoa beans that have been ground up and had all the fat pressed out. It is simply the pure fibre of the cocoa bean. IF... chocolate were in reality the brown stuff (fibre), then this would in essence be the purest form of chocolate. however it's not. It's called cocoa, and can never be called chocolate, as it doesn't have enough of the fat in it.

Now you have the truth. White chocolate is just as much "chocolate" as dark or milk chocolate.

To learn more about chocolate and chocolate related products and the legislation surrounding nomenclature, please visit the following page on the FDA website: FDA Chocolate Rules and Regulations

Brad Churchill is the owner and creator of all things "Choklatey". With over 30 years of business experience, 11 years of chocolate experience and many thousands of hours of research behind him, Brad Churchill brings to the table a very unique and pragmatic view of the emergent artisan chocolate industry. It is Mr. Churchill's hope that he can impart his experience upon budding chocolate entrepreneurs and help them balance their passion for this industry with the hard hitting reality and challenges of owning their own business. These articles are just the beginning....

Oh My Gosh! I've been waiting for you to finally start making white chocolate! If it's as good as what I tasted in your shop the other day when you sampled it out.... Is it April 1 yet???

Ok. I have to admit that I generally don't like white chocolate, but the sample you gave out was so creamy and flavorful. Wow.