A Bit About The Bad Boy Behind The Curtain...

I always chuckle to myself when someone asks how I became a master chocolate maker. Haha! I feel like saying "Me a Master? Hardly. Chocolate is 4 ingredients. It doesn't take a rocket scientist to make it!". Sigh.... Sometimes I wish there was a deep, romantic story about how and why I became a chocolate maker. The truth is back in 2005, while wrapping up another entrepreneurial venture, I bought a very expensive box of luxury chocolates and learned that the chocolatier didn't actually make the chocolate they used in the confections. All they did was melt somebody else's stuff down, stamp their name on it, tell everybody they made the chocolate, and charge 15 times what they paid.

As a consumer, I felt cheated and after giving it some thought, decided to do something about it. Whether right or wrong, good or bad, I set out to be the "bad boy" of the chocolate industry. Over the next three years I did thousands of hours of research. I contacted some of the most well respected chocolate scientists in the world, experimented with 100's of recipes, and made 100's of lbs of chocolate in my own home. My quest was to 1) publicly kick sand in the faces of chocolatiers who lie to people about what they do, 2) properly educate people about the chocolate industry and correct what they've been led to believe for years, and 3) produce a confection of a quality that was beyond reproach, but without all the pretentious marketing crap that's often associated with fine quality chocolate. 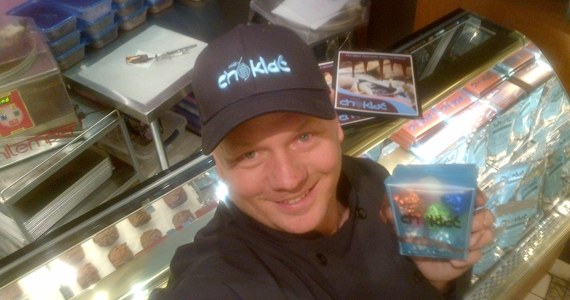 In August of 2008, I opened the doors to Choklat for the first time and received mixed reviews. Some people hated me. After all, who was I to besmirch the name of their local chocolate demi-god? pffffft! In typical bad boy fashion I flipped them the bird and told them if they were going to be mad at someone for being honest, they could crawl back into their delusion and return to blissfully happy ignorance. Others took a step back in surprise at what I told them, thought about it, and then said "Oh My God! Your chocolate is amazing!".

That was 8 years ago. My gosh how time flies. I've weathered the storm, and since then I have had over 20 million hits to my website, had some of my recipes published, been featured in countless magazines and news articles, won numerous public awards and accolades for my chocolate, and burned through a lot of employees who thought mediocre was good enough. My staff have educated 10's of thousands of people about the differences between being a chocolate maker and a chocolatier, and I have had some of the most prolific chocolatiers and chocolate professionals in the world today walk through the doors of my business to say hi and see what everyone's talking about.

I've also helped create a ground-swell of artisan chocolate makers. People from all over the world regularly contact me for advice, and follow my contributions to numerous online "chocolatier" forums. When I first started there were only two chocolate makers in Canada. Now I know of 6 serious artisans, and more are popping up every day. I think that's fabulous! I'm proud to be considered an industry leader, and proud to see others celebrating their craft in an honest fashion!

Today, it's incredibly refreshing to know that my gamble 8 years ago to be the "bad boy" of the chocolate industry has paid off and caused changes in the industry. Today, people are more educated. My competitors have been forced by the public to change their packaging to more accurately reflect what they do. It's refreshing to know that while some people don't like my approach, they certainly respect my honesty and integrity.

While all of this was going on and I was busy kicking up my sand storm, something else happened. I fell in love - not with a person or thing, but with a "feeling". When the dust cleared, I realized that every person walks through the door of my business for a reason. Maybe they want to celebrate. Maybe they've had a bad day and are looking for a little indulgence. Maybe they've just received devastating news and are desperately searching for something to take the edge off - even if for just a moment. Whatever their reason, they are standing at my counter smiling or crying (and yes I have experienced both) and my team is in the unique position to brighten their day.

Wow... no words can describe the rewarding feeling of warmth and compassion I experience while I watch time and time again, as people relax and savour the indulgences I have created for them. To hell with the competition and their false bravado. Today, brightening a person's day is the driving force behind what I do.

Brad Churchill is the owner and creator of all things "Choklatey". With over 30 years of business experience, 11 years of chocolate experience and many thousands of hours of research behind him, Brad Churchill brings to the table a very unique and pragmatic view of the emergent artisan chocolate industry. It is Mr. Churchill's hope that he can impart his experience upon budding chocolate entrepreneurs and help them balance their passion for this industry with the hard hitting reality and challenges of owning their own business. These articles are just the beginning....

Your article on wholesome ingredients really resonated with me. For years I have been encouraging my friends and family to eat better. It's good to see that someone is taking that initiative in the confectionary industry too!

First of all Brad, I LOVE this new site! Wow. I've always liked your truffles. The freshness definitely shines through. I have to admit though, I'm still partial to your bars. They are hands down the best chocolate bars I have ever eaten.

You should host some events relating to making chocolates and candy with natural ingredients. I attended your wine and chocolate pairing evening, and it was a hit. Oh... and I had a good laugh about the "Charlotte" comment! LOL